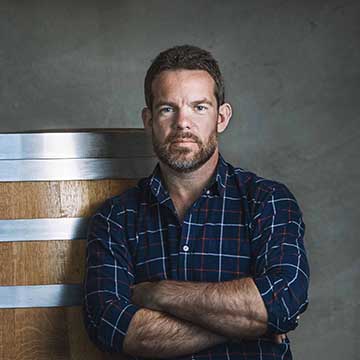 Announcing Our New Chief Winemaker The best part is, you already love his work!

Duncan’s been part of the Giesen winemaking team as Senior Winemaker since 2017 meaning he’s integral to our recent winemaking success and innovation.

Duncan led the team responsible for the creation of Giesen 0% – Marlborough Sauvignon Blanc, which has been winning fans throughout the world since its inaugural release in February 2020. He explains Giesen 0% was the direct result of the 2019 winemaking and viticultural team fitness challenge. With the team focusing on cutting back for the challenge they wondered what a very low alcohol Sauvignon Blanc would taste like.

Talking about his role as Chief Winemaker, Duncan says he’s looking forward to the opportunity to continue working with the great team, influencing the style of Giesen Wines and building on what has been achieved. He even dropped a couple of hints about some exciting new projects he and the winemaking team are working on….but which remain under wraps for now.

Duncan says he takes pleasure from seeing and tasting quality fruit on the vine in the vineyard and then translating that into flavour in the bottle. “Capturing wine which tells the story of vintage, its variety and the place it was grown is a wonderful experience.”

Growing up in England and studying marine biology in Scotland may not sound like the ideal pathway to a winemaking career, but it worked for Duncan. After beginning his marine biology studies in Scotland, he transferred to the University of Auckland for his final year. Sold on the Kiwi outdoors life he remained in New Zealand after his studies, moving to Bay of Plenty as a scuba instructor. After a couple of years, he returned to university completing a Masters in Winemaking.

While studying winemaking, Duncan worked and undertook research in Marlborough and for the following few years he gained winemaking experience throughout New Zealand including Martinborough and Central Otago, as well as completing vintages in Bordeaux and California.

Duncan’s experience at boutique wineries, large commercial operations and every winery in between has shaped his winemaking approach. He always aims to incorporate small, hands-on winemaking techniques and philosophies, even when he’s making accessible, good value wines.

Working for Giesen enables Duncan and his family live in the heart of the beautiful Marlborough region, so when he’s not working, he can indulge his favourite outdoor pursuits hiking and diving for paua and crayfish. He’s also a keen cook and his most recent creation is a combination of two of his loves – paua ravoli, which he believes is the perfect match with Giesen’s ‘The August’ Marlborough Sauvignon Blanc 2018.