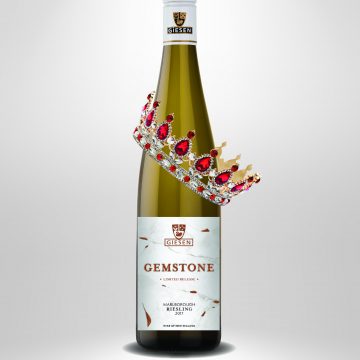 That’s why the Giesen winemaking team has created a limited release, Gemstone Riesling.

Giesen has a quality Riesling pedigree. Founders Theo, Alex and Marcel Giesen drew upon their German heritage to create Estate Riesling which they have made since their first vintage in 1984. Giesen Estate Riesling has become a favourite with Kiwis. It has won five consecutive Gold Medals at the New World Wine Awards and multiple trophies, including most recently; Champion Riesling Trophy and Champion Open White Wine Trophy, at the Air New Zealand Wine Awards 2016.

Giesen Chief Winemaker Nikolai St George says as soon as they hand-picked the Riesling from Eden Vineyard in Waihopai Valley they knew the fruit was special. “The fruit looked amazing, so we decided to keep it separate and experiment by fermenting it in three different vessels. We are fortunate to have large granite tanks and so we put a parcel in that and other parcels in stainless and seasoned oak barrels.”

Nikolai says it’s the use of granite which makes Gemstone so special. Granite tanks are made from one giant slab of volcanic rock and the French have been fermenting in them for centuries.

Nikolai said when the winemaking team considered the three parcels of Eden Vineyard Riesling they decided upon the inclusion of 25% of the granite fermented wine in the blend. “The addition of the granite ferment created a wine of length and intense flavour, something that was special and different to Giesen’s other Rieslings.”

Mother nature threw in some challenges through the 2016/2017 growing season – a major earthquake, a cool, windy summer and some autumn rain. While this meant vintage 2017 delivered a smaller than predicted harvest, reduced fruit volume ensured a balanced crop.

Riesling vines in the Giesen owned Eden Vineyard in the lower Waihopai Valley were intensely managed. The vines, with an average age of more than 20 years, were shoot and bunch thinned to maximise ripening and ensure pure, intense flavour. Fruit was hand harvested before being pressed as whole bunches. Free run juice was fermented in a combination of granite tanks, seasoned oak barrels and stainless. After fermentation, the wine was matured on light lees for five months.

This special limited release Riesling really is a gemstone. Just as mother earth creates gemstones, Giesen worked in harmony with the earth, growing full flavoured Riesling grapes which were fermented and matured in granite, creating a precious gem, Gemstone by Giesen.

This wine is enticing and textural with notes of luscious citrus blossom and white florals. A beautiful flow and balance with subtle sweetness and hints of smokiness.

Enticing, Heavenly, Unique. A unique Gemstone of a wine.

Read more about Gemstone by Giesen