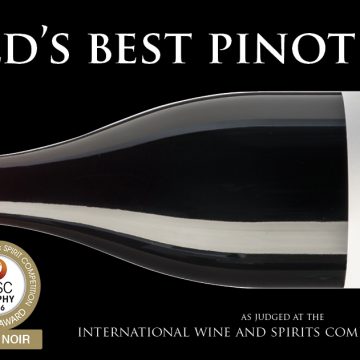 Giesen Wines has been awarded the Champion Pinot Noir Trophy at the highly respected 2016 International Wine and Spirits Competition (IWSC), in the UK.

Now in its 47th year, the IWSC was the first competition of its kind, set up to seek out and reward the world’s best wines. The competition is known for the formidable reputation of its judging process which takes seven months.

Marcel Giesen, who co-owns Giesen Wines together with brothers Theo and Alex, says the win is hugely exciting for the family and is testament to a decision seven years ago to replant the Ridge Block vineyard.

“It brings such great pleasure to our family and all the Giesen team. There’s always a lot of talk about awards and trophies but this one is the ultimate for us so far and really makes us sit back and think how far we have come. We’re absolutely thrilled.”

The Giesen owned organic Ridge Block vineyard, certified by BioGro NZ, is located in Southern Valleys sub-region in Marlborough. It’s key to Giesen’s programme of growing premium organic grapes that tell the story of their region.

The vineyard was initially a low performing Sauvignon Blanc and Chardonnay vineyard, but a consultant French soil expert advised Giesen Wines that the vineyard’s soil was best suited to Pinot Noir and Syrah.

In late 2008 Giesen ripped out the 8.5 hectares block and left the land fallow for a year. Ridge Block was subsequently replanted in high density 1.5 metre rows as a wholly organic, Pinot Noir and Syrah vineyard. Today it has 40,000 vines, instead of the former 20,000.

“This high density planting creates intense competition that pushes the vines deeper into the soil to find nutrients and water. Such competition naturally reduces crop sizes. Along with our active thinning of fruit yields, this results in flavour intensity, structure and complexity.”

“Everyone thought that we were crazy pulling out Sauvignon Blanc …we even questioned it a few times and it was a hugely expensive project,” Marcel says.

“The careful planning in the establishment of Ridge Block has resulted in the balanced growth of the vines that can sometimes take years to manage. The wines from this young vineyard already show depth and structure unexpected in vines so youthful and we’re excited to see how it develops over the coming years.

“It’s a serious financial commitment to quality wine and excellence – something that can only happen if we all believe in it and work hard as a team to make even more improvements.”