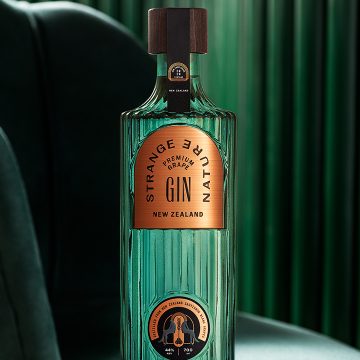 A new gin company has found an inventive use for the alcohol removed from our 0% New Zealand Sauvignon Blanc.

Earlier this year, Giesen invested over a million dollars into spinning cone technology to gently remove the alcohol from some of its most popular wines. The machine is now working 24/7 to keep up with demand.

Giesen Group Chief Winemaker Duncan Shouler says Giesen has been blown away by the popularity of the alcohol-free range, which now includes a Rosé and a Pinot Gris.

“Even with the spinning cone working around the clock, we’re only just keeping up with demand, so we’re only selling in New Zealand, Australia, and even the United States.”

“The spinning cone process is gentle, preserving the aroma and flavours of the Sauvignon Blanc wine as the alcohol is removed. What we’re left with is a beautiful, pure New Zealand alcohol. It tasted so good we started to imagine how we could share it with the world,” says Shouler.

Enter Giesen Group’s General Manager, Kyle Skene. Upon tasting the alcohol, he decided there was only one thing to do – make spirits. In particular, he set his sights on crafting a premium grape gin.

“I’ve spent over a decade in the spirits industry developing global spirit brands, and the potential of the Sauvignon Blanc alcohol was immediately clear. There’s huge appeal in developing a quintessential New Zealand spirit that could be traced back to Giesen’s roots,” says Skene.

Over 18 months, Skene worked with distillers to experiment – trialling a range of botanicals and taste testing each batch. The winning recipe was the one that allowed the aroma and flavour to jump out of the bottle.

“We tried all sorts of combinations of botanicals. In the end, we realised the Sauvignon Blanc aroma and flavour captured in the spirit tasted so good that we only needed a single botanical – juniper.

“The result is a unique gin with real provenance. The fact we’ve grown the grapes and made the wine before we even think about crafting the gin means we know our spirit inside and out.

“We know the vineyard terroir and the rows the grapes were grown in – we have complete trust and traceability in every batch,” says Skene.

Skene says the journey – from making the first Giesen 0% wine to experimenting with gin – took the team down some unexpected paths.

“Giesen has 40 years of experience crafting wine. The company’s thirst for innovation drove the creation of our 0% range, but there’s no doubt inquisitiveness made this gin.”

Kyle has now joined Theo, Alex and Marcel Giesen in setting up the new boutique gin company, which will distil and sell the gin.

“We started off pursuing one thing and discovered entirely another. What’s resulted is an inventive spin on a traditional gin – a natural, truly grape-based gin that goes against the grain, aptly named Strange Nature.”

The first batch of gin will be released online via Gin Club on 1st October 2021, and from 4th October will be available for sale at select retailers and on premise outlets.